Astherna is a company  that develops novel RNA treatments for inherited retinal diseases. With these therapeutics, we aim to stop progression of these diseases and prevent patients from becoming blind. Our first focus is on Stargardt disease. Astherna is situated in Nijmegen, the Netherlands, and has a close connection to the Radboud University Medical Center. Astherna is founded by Rob Collin, a scientist with expertise in genetic subtypes of retinal diseases and inventor of the RNA therapy, together with  Carel Hoyng, an ophthalmologist with over three decades of knowledge on the clinical aspects of inherited retinal diseases.

The first retinal dystrophy for which Astherna aims to conduct a clinical trial is Stargardt disease.

How does RNA therapy work?

In the process of protein production in a cell, DNA can be seen as the book of recipes for proteins. When a protein needs to be cooked, a copy is made of the relevant recipe, which provides instructions to the protein kitchen of a cell on how to make the protein. This recipe copy is called RNA.

RNA therapy consists of a solution with small molecular band-aids (AONs), which precisely fit to the area surrounding the mutation in the ABCA4-RNA. When such a band-aid binds to the RNA, it covers the mistake in the recipe, and the protein kitchen will ignore the mistake and produce a normal, functional ABCA4 protein. 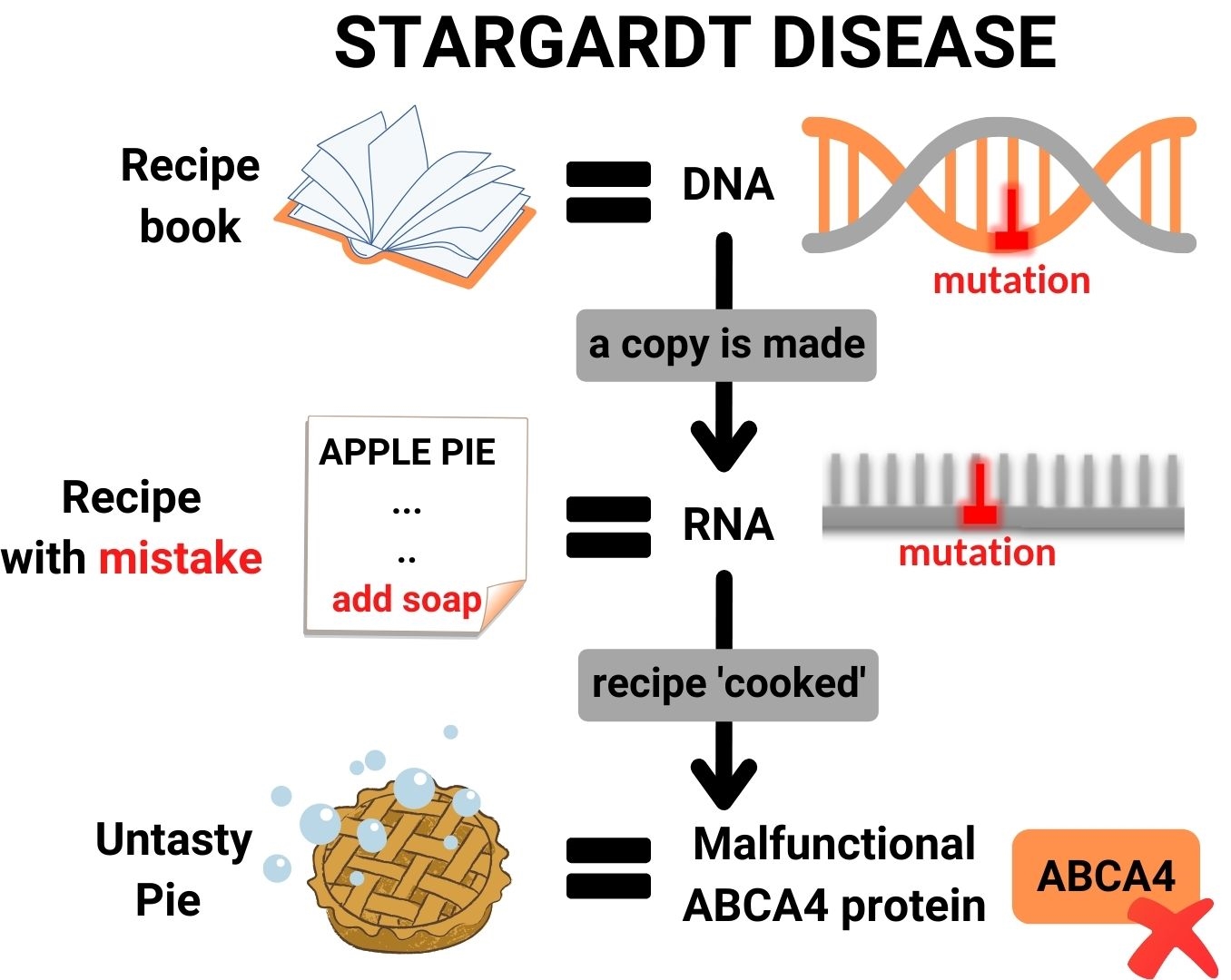 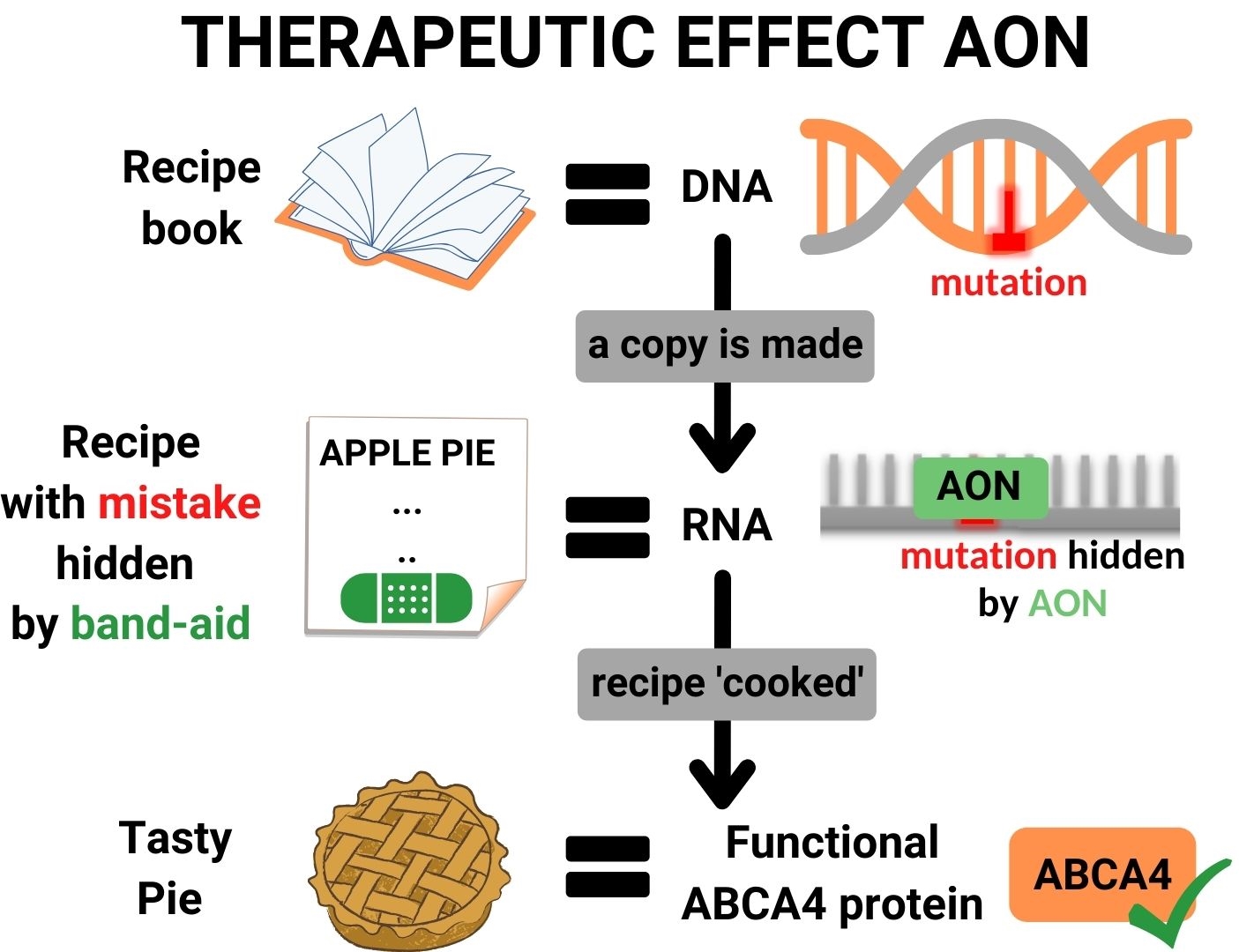 More detailed information about the mode of action of RNA therapy can be found here.

Why use RNA therapy for Stargardt disease?

Stargardt disease is caused by mistakes (mutations) in the DNA of a patient, which also appear in the RNA. These mutations lead to problematic changes in essential processes that occur in the eye, resulting in vision loss. In short, RNA therapy consists out of small molecules, which enter retina cells and can correct genetic mistakes in the patient’s RNA.

More detailed information about Stargardt disease can be found here.

Who is eligible for treatments with RNA therapy?

RNA therapy works in a mutation-specific way, and is thus designed to stop disease progression at the root cause of the problem; mistakes in the ABCA4 gene. Each person has two copies of the ABCA4 gene: one you receive from your mother, and one you receive from your father. Patients with STGD1 have mutations in both copies of ABCA4. These two mutations are often different from one another, and not every patient has the same two mutations in ABCA4. In fact, there are over more than 1000 different mutations known for ABCA4. One mutation is more common than the other, and one mutation is also causes more severe problems than the other.

As a consequence of this, each ABCA4 mutation requires its own RNA therapy. The first RNA therapy Astherna develops restores a mutation that is relatively common, especially in Europe. However, this still means that this RNA therapy can only treat a subgroup of STGD1 patients. When this RNA therapy is proven effective, Astherna will continue to develop new RNA therapies for other mutations of STGD1, as well as for other inherited retinal diseases.

Moreover, Astherna’s RNA therapy is aimed to stop progression of the disease. It is unlikely that it will reverse damage that has already occurred to the retina, but is most likely to prevent further decay in vision. Therefore, it is expected that the highest benefit can be achieved in patients that still have some residual visual function.

Are there any alternative treatments being developed?

Due to its relative high occurrence, and the severe nature of Stargardt disease, many scientists and companies worldwide are attempting to develop a treatment, with various different approaches (gene replacement, gene editing, cell replacement, pharmacological). Unfortunately, to date, there is not yet a treatment officially approved.

What does a treatment with RNA therapy look like?

The RNA therapeutic solution will be administered by an injection into the eye. Depending on the stability of the drug, it is currently expected that a new dose needs to be given 2-to-4 times a year.

When will the treatment be available?

The drug development process – from drug discovery up to prescription of the drug to patients by a clinician- is a long process, in which the efficacy and safety of the drug is maximized and thoroughly tested before it is allowed by regulatory authorities for use by patients. However, the treatment can already be given to a group of STGD1 patients in the test phase of drug development. It is then still uncertain whether the drug will work. The first studies are expected to start within 2 years.

How far is the development of the AON therapy now?

Currently, Astherna’s RNA therapy is in the preclinical phase. This means that the therapy is developed to be as effective and safe possible, based on laboratory experiments.

When a treatment is shown to be effective and safe in the lab, the next step is to test the drug in patients, to determine the magnitude of a potential therapeutic effect, the best dose and risk of side-effects. This is the clinical phase, which can be further divided into three phases: